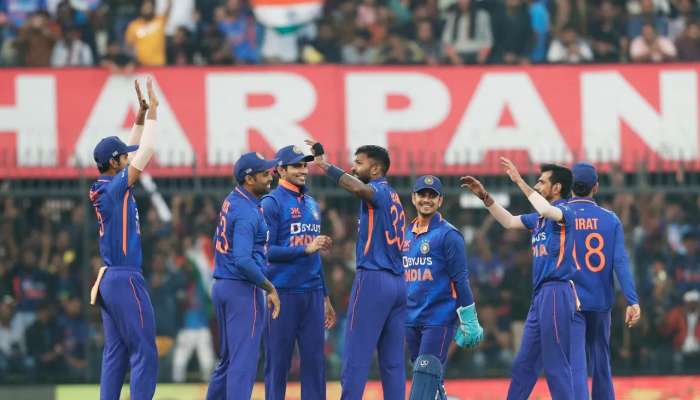 Indore: Centuries from openers Rohit Sharma and Shubman Gill followed by three-wicket hauls from Shardul Thakur and Kuldeep Yadav help India defeat New Zealand by 90 runs in the third and final ODI of the series at the Holkar Cricket Stadium in Indore on Tuesday.

Devon Conway was the highest run scorer for New Zealand with a blistering knock of 138 runs off 100 balls.

Defending 386 runs, India gave New Zealand a big blow as Hardik Pandya bowled Finn Allen on the second ball of the first over.

Despite losing Allen in the very first over of the innings did not stop Devon Conway from slamming Indian bowlers all around the ground as the New Zealand opener kept scoring boundaries at regular intervals.

Henry Nicholls joined hands with Conway to keep the visitors in a hunt for steady runs chase. The duo of Nicholls and Conway took their team’s total beyond 100 runs in the 15th over of second innings. The duo also stitched up the 100-run partnership, however, the stand was broken by Kuldeep Yadav who dismissed Nicholls after scoring 42 off 40 deliveries.

Conway looked in supreme touch and raced to his century in 71 balls to keep New Zealand alive in the chase in the 24th over. Captain Rohit Sharma then brought Shardul Thakur back into the attack and the pacer gave New Zealand two back-to-back blows. Shardul dismissed Daryl Mitchell for 24 then he improved his delivery and removed Tom Latham.

In the 28th over of the innings, Thakur provided India with another wicket as he sent new batter Glenn Phillips packing after scoring just 5 runs. After losing five-wicket, Conway kept hitting Indian bowlers all around the ground with batter Michael Bracewell.

A terrific inning of 138 in just 100 balls with 12 fours and 8 sixes by Devon Conway came to an end as Umran Malik dismissed him in the 32nd over of the innings. New batter Mitchell Santner then came out to bat.

In the 37th over of the innings, Kuldeep dismissed a dangerous batter Michael Bracewell for 26 runs off 22 deliveries, leaving the visitors tottering at 269/ 7. Lockie Ferguson fell prey to Kuldeep’s sharp delivery in the 39th over of the game. In the next over Yuzvendra Chahal bagged his first wicket of the match, dismissing Jacob Duffy.

Earlier, centuries from openers Rohit Sharma and Shubman Gill and a half-century from all-rounder Hardik Pandya guided India to a massive total of 385/9 in 50 overs. Put to bat first by New Zealand, India got off to a fantastic start.

Openers Shubman Gill and skipper Rohit Sharma showed no mercy on Kiwi bowlers and scored with attacking intent from the word go. Gill smashed pacer Lockie Ferguson for 22 runs in the eighth over which included four boundaries and a six. India crossed the 50-run mark in 7.4 overs.

At the end of the first 10 overs and the mandatory powerplay, India were 82/0, with Rohit (39*) and Gill (41*). Gill brought up his sixth ODI fifty in just 33 balls with a wristy whip to Mitchell Santner in the 12th over. Rohit also brought up his 49th ODI fifty with a huge six on Santner’s delivery in the 14th over in 41 balls.

Rohit looked in supreme touch and brought up his 30th ODI ton, his first since January 2020 in the 50-over format in just 83 balls. Gill also reached his fourth ODI ton in just 72 balls, hitting Blair Tickner for a four. All-rounder Michael Bracewell delivered the breakthrough for Kiwis, ending the 222-run stand between the openers. Rohit was dismissed for 101 of 85 balls, with nine fours and six sixes.

In the very next over, Tickner dismissed Gill for a well-made 112 of 78 balls, with 13 fours and five sixes. India were 230/2 at this point. Virat Kohli and Ishan Kishan were the fresh pair on the crease. Both continued with the attacking gameplay exhibited by the openers. India reached the 250-run mark in 32 overs.