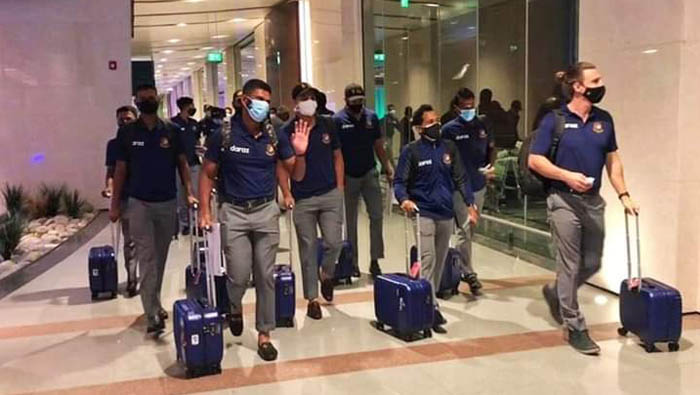 The Asian side will first play in the qualifiers and will begin the campaign against Scotland on October 17 in Al Amerat.

The Asian side will first play in the qualifiers and will begin the campaign against Scotland on October 17 in Al Amerat. "Bangladesh Team arrive in Muscat today (4 October, 2021)," Bangladesh Cricket tweeted.

Bangladesh will then take on Oman and Papua New Guinea in the subsequent games and if they qualify, the Asian side will lock horns with the heavyweights in the showpiece event later this month.

Meanwhile, all UAE venues will be operating at approximately 70 per cent of maximum seated capacity in the upcoming men's T20 World Cup, said the International Cricket Council (ICC) on Sunday.

Tickets are available for fans to watch the top 16 T20 teams in the world vying for the ultimate prize in the shortest format which gets underway in Muscat on October 17 and is set to conclude in the UAE on November 14.

Moreover, Abu Dhabi has also introduced new socially distanced 'pods' of a maximum of 4 spectators on their east and west grass mounds. The Oman Cricket Academy has had a temporary infrastructure built to welcome 3,000 fans.

The schedule offers a host of key rivalry fixtures and mouth-watering matchups. The tournament kicks off with the Round 1 match between Oman and Papua New Guinea in Muscat.

Whilst, Australia and South Africa play the first match of Super 12s on October 23 in Abu Dhabi followed by the replay of the 2016 final between England and West Indies also on October 23 in Dubai.

One of cricket's biggest rivalries, India versus Pakistan, will take place on October 24 in Dubai.

Gulf International Poultry Farm to open in Ibri on Thursday