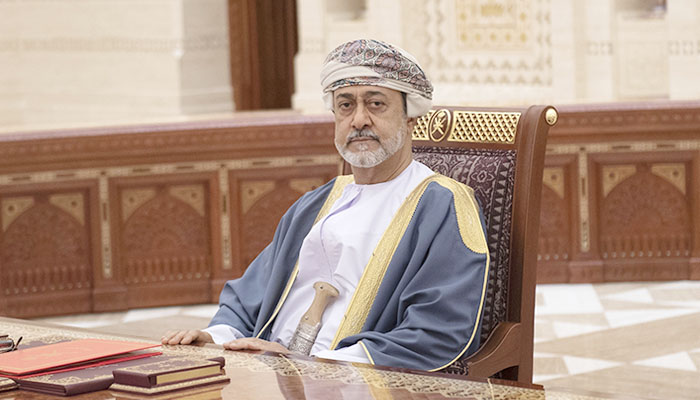 “Your Majesty Sultan Haitham bin Tarik, the Supreme Commander, may the Almighty Allah protect you.

On this anniversary of the 11th of January, the day when Your Majesty assumed the reins of power in the country, Oman is witnessing an immersive spirit of happiness that prevails everywhere. A new era unfolds within the purviews of a Renewed Renaissance envisaging a bright future of progress and prosperity. On this auspicious national occasion, I am honoured to greet Your Majesty on behalf of myself and on behalf of all personnel of your Armed Forces and the Ministry of Defence, praying to the Almighty Allah to endow Your Majesty with good health and happiness and to make Oman an oasis of peace and prosperity.

Your Majesty the Sultan,

The celebration of the 11th of January is an embodiment of manifestations of eternal days of Omani history. This day adds a brick stone to the great accomplishments of Oman and the contribution of its sincere citizens.

Your Majesty, the Supreme Commander,

Your Armed Forces constitute one of the greatest achievements of the Omani renaissance. While they earn their establishment and transformation to the founder of their modern setup, the Armed Forces forge ahead with confidence under Your Majesty’s wise leadership in a new renewed attire, armed with all means of progress, and they continue to be a model of Your Majesty’s renewed renaissance.

While living through this atmosphere of celebration, all personnel of Your Majesty’s Armed Forces reiterate the pledge of loyalty and allegiance to Your Majesty and they vow to be the defenders of this great renaissance. They pray to the Almighty Allah to protect Your Majesty and to bring back this occasion at a time Your Majesty enjoys good health and happiness.”

Over 50 restaurants inspected in Muttrah, 6 fined

Japan steps up anti-COVID measures amid record rise in cases