Splendid Salalah: One of the best international tourist destinations 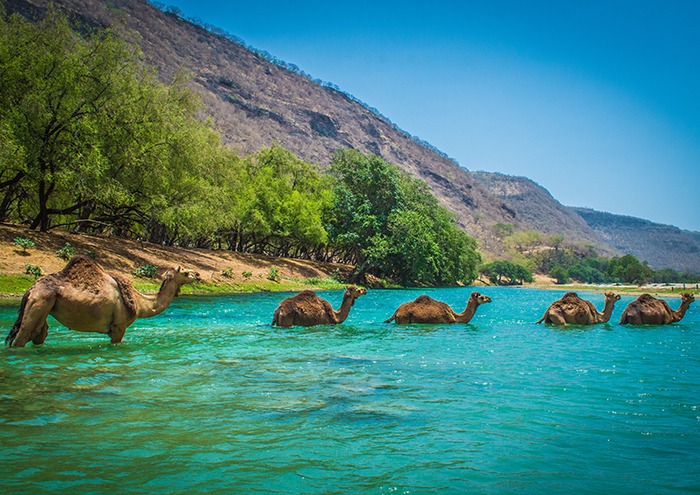 Salalah has ranked second in the Arab world, and 26th globally as the best international tourist destinations to be visited in 2023, in a report published in The New York Times.  Rich in nature reserves, beaches, water springs, valleys and caves, it is also home to many archaeological sites some of which have been enlisted in the World Heritage List. And while Khareef is the best time to this picturesque land of greenery, Salalah is worth a visit any time of the year. Here are some of the must visit places.

Al Mughsail Beach
For an exciting view of the sea, you need to visit Al-Mughsail Beach in Salalah. The running surf is a soothing backdrop for reading and sightseeing but not for swimming. Along the way, you will pass by caves embedded in rocky crags by the roadside. The panorama of the beach from the ridge above is breathtaking.

Ittin Hills
One of the most famous and most oft-driven mountain roads in Salalah runs through the Ittin Hills. It will take only ten minutes from the heart of Salalah to reach the luscious green hills filled with mist and drizzle, but the drive itself is an experience. Hidden atop one of the picturesque hills is Nabi Ayub’s tomb. Drive beyond the tomb and explore nature .

Ayn Razat-Wadi Sahalnoot
Climb the winding road beyond Ayn Razat to explore green, wet hills where herds of cows, sheep, and camels graze. It’s a scenic drive all the way as the road is covered with trees on both sides and the lush green views are fabulous. The roads are good, but narrow with sharp curves.

Khor Rori (Sumuharam)
This ancient heritage site is located approximately 40km east of Salalah between Taqah and Mirbat and was used as a port in earlier times.The port was a fortified outpost of the Hadramawt frankincense kingdom. Discovered in the 19th Century by James Theodore Bent, historians say that this was mostly a wealthy settlement as several bronze vessels, incense burners and the limestone basins were excavated from the ruins.It has been found that the city was well planned with private and public buildings along with fertile lands and orchards. During excavation other items found were chisel, hooks, needles, razors, blades, clips, locks, lamps, mirrors, bracelets, necklaces, and several other accessories.

Frankincense Land Museum
Frankincense Land Museum at Al Baleed Archaeological Park is one of the prominent cultural landmarks and distinctive examples of the museums available at the archaeological parks listed on the World Heritage List. It is situated on the coastal strip of Salalah, about 5 km from the city centre. The museum is a comprehensive view of the Sultanate and an opportunity to learn about its historic and maritime heritage.

Sultan Qaboos Mosque
The Grand Mosque in Salalah has often been a place of quiet contemplation and sincere devotion, while also being one of the most recognisable and well-known buildings in the capital of the Dhofar. The largest mosque in Salalah is definitely an inspired place of worship that’s worth a visit if you are in Salalah. The Sultan Qaboos Mosque is located in the heart of the city, where people who come to pray and also the visitors stand in awe as they admire its architectural beauty inspired by the Islamic and cultural motifs from Oman’s history. Inside the mosque, the prayer hall is beautifully decorated with crystal chandeliers, handwoven carpets in shades of green, and patterned walls.

Anti Gravity Point
Located on the route between Mirbat and Salalah, there is a stretch of road which defies gravity. Once you put the car in neutral gear it will start moving up.

Fruity escapade
Salalah is known for growing a variety of produce including coconuts, papayas, bananas, lemons, sugarcane, guavas, pomegranates, raspberries, and avocados, as well as tomatoes, cucumbers, and watercress. Though the place offers various tropical fruits, it’s mostly famous for coconut and bananas. You can find these treats at the traditional market, on the side of the road, or at select shops across Salalah.