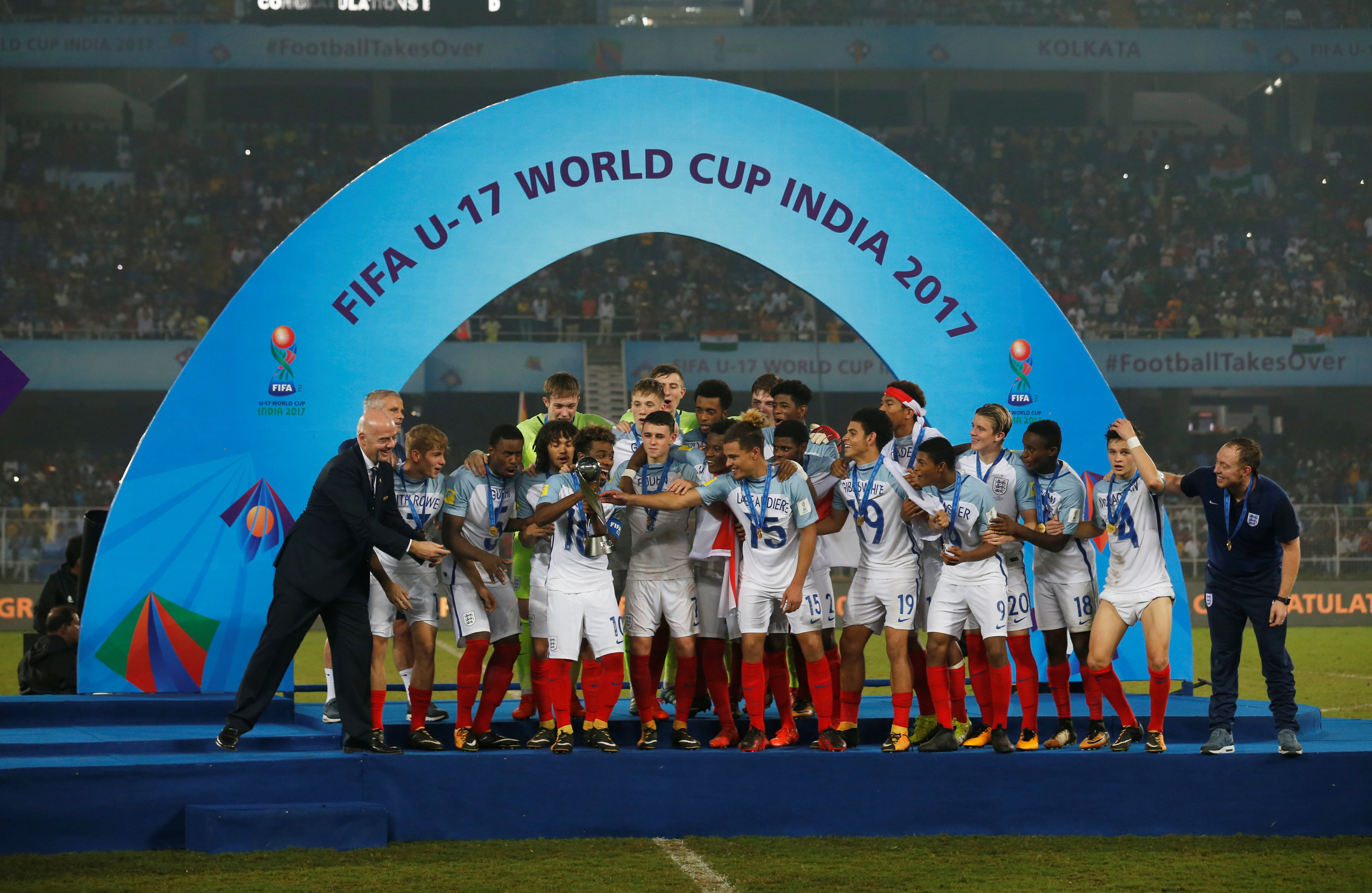 Kolkata: The world's most talented young players gave India a memorable show of high quality football on the field while the country showcased its organisational skills in near flawless and record-breaking tournament across six cities, which culminated with England clinching the title.
Packed with players from the academies of top English Premier League clubs, England grabbed their maiden title in their fourth appearance after beating Spain 5-2 in the highest scoring and perhaps the best summit clash of all the FIFA Under-17 World Cups till date.
In a tournament of many firsts, it was befitting that the two best technically sound teams met at the finale -- first ever all European final. Both sides provided an exhibition of enthralling possession football and attacking style of play.
Legendary Dutchman Marco van Basten, who is currently FIFA Chief Officer for Technical Development, hailed the tournament for the high quality on the field and technical level of the players.
England avenged their loss to Spain in the European Championships final in May and became only the ninth country to clinch the title here on Saturday night.
The win meant the 'Three Lions' ruled the world at the age-group level after their U-20 side won the World Cup in Korea earlier this year.
The Steve Cooper-coached side also remained the only unbeaten team in the tournament. They defeated strong sides like Mexico, United States and Brazil before teaching Spain some lesson on attacking football in the second session of the summit clash in front of full-to-the-brim Salt Lake Stadium.
Spain, on the other hand, yet again ended as runners-up for the fourth time after 1991, 2003 and 2007. With most of their starting XI coming from the academies of top two La Liga sides -- Barcelona and Real Madrid -- the Santiago Denia-coached team was packed with talented and technically top class players.
But they were simply overwhelmed by an exceptional England, who recovered from two-goal deficit with a brilliant exhibition of attacking football.
Three-time champions Brazil disappointed at the business end of the tournament and were beaten by more attackingly-efficient England in the semifinals.
They started as pre-tournament and crowd favourites and showed glimpses of their natural flair, but surprisingly lacked finishing. They even struggled to find the opposition net against the likes of Niger and North Korea.
Manchester City starlet Philip Phoden, who was praised by first team coach Pep Guardiola, mesmerised the Indian fans all through the tournament and was the tormentor of Spain on Saturday night with his speed, technique and finishing abilities.
Fittingly, Phoden, who scored twice on Saturday night, was adjudged the player of the tournament and got the Golden Ball while his teammate Rhian Brewster, who scored two hat-tricks in the tournament to almost single-handedly send USA and Brazil packing, emerged as the top scorer with eight goals and received the Golden Boot.
The home side, as expected, could not get past the group stage, losing all their matches against Ghana, Colombia and USA. But they fought well with good organisation and maintaining the shape. They came close to grabbing their first point before losing 1-2 to Colombia with Jeakson Singh becoming the first Indian to score a World Cup goal.
Coach Luis Norton de Matos conceded the gap between his side and other countries.
FIFA President Gianni Infantino also pointed out the same though he said the gap was not that much.
Off the field, the tournament was a resounding success, which Infantino declared after presiding the FIFA Council Meeting here ahead of the summit clash.
The Council was held for the time at the venue of a FIFA U-17 World Cup host country.
This edition of the U-17 World Cup turned out to be a milestone event as it became the most attended and highest scoring tournament in its history. It became the most attended men's age-group World Cup ever, shattering the most attendance record of FIFA U-20 World Cup.
With 66,684 turning up to see the summit clash here, the total attendance at the six host venues logged 1,347,143, which is 116,167 more than the earlier record attendance of 1,230,976 set in the first edition in China in 1985.
The total number of spectators in this FIFA U-17 World Cup is also 37,214 more than the record of highest attendance in an U-20 World Cup -- that of 1,309,929 in Colombia in 2011.
The India edition also became the highest scoring tournament with 177 goals from 52 matches, bettering the earlier highest of 172 during the 2013 United Arab Emirates.
It also has the highest goal average of 3.40 per match since the tournament format was changed in 2007 to a 24-team affair from the earlier 16-team participation.
The only blemish the tournament had, if there was one, was the semifinal match between Brazil and England being shifted from Guwahati to Kolkata due to poor ground conditions after heavy rains in the Assam capital.
The huge success of the tournament prompted All India Football Federation President Praful Patel requesting Infantino to allot the 2019 FIFA U-20 World Cup to India, but the world body chief did not give any commitment.