Anti-cancer campaigner lives in hearts after losing fight for life 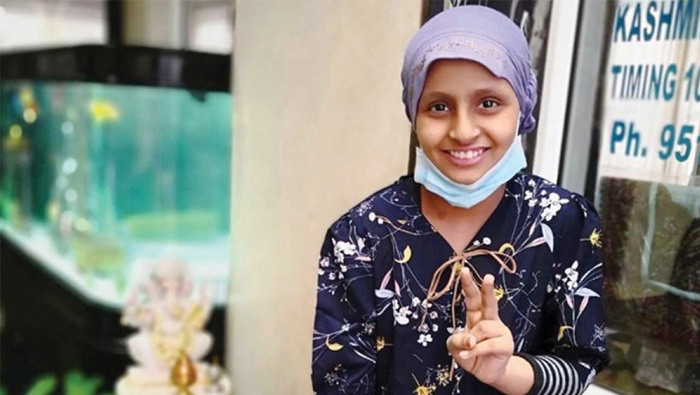 Muscat: Two weeks after Oman’s “cancer-fighter” passed away, she is still missed and remembered as a “sweetheart” who was loved by everyone.
Maysoon Al Rawahi, 11, was one of the many children to live at Dar Al Hanan. She was seen to the world as a tough fighter, but to everyone at Dar Al Hanan, she still remains in their hearts as the sweetheart who loved everyone and enjoyed every bit of time she had with her peers.
“She was a sweetheart and was loved by all – the nurses, the children and other parents who were around. She enjoyed spending most of her time playing with her friends and making other people laugh. She used to imitate famous personalities in a funny way and shared the joy of humour among all. Those are some of the memories none of us can forget,” said a Dar Al Hanan staff member.
Maysoon joined Dar Al Hanan in June 2017 and was there ever since. She received the care she needed there.
“She was very nervous and sad at first when she came here. She had learned about the disease at the time. But over time, the constant attention and love pouring in from all corners of Dar Al Hanan made her forget it and made her a perfect 11-year-old girl again,” said Amal Othman, a supervisor at Dar Al Hanan.
“At Dar Al Hanan, we try to offer every bit of attention to all 27 children to support and keep them moving on this path to recovery. Heartbreakingly, we lose a few on this journey. Maysoon’s friends miss her now. Aisha, Maryam, Mohammed and his brother Ahmed miss the laughter, jokes and playing and drawing with Maysoon,” she added.
Just like Maysoon, Dar Al Hanan has had a few fallen warriors – children who taught everyone the importance and value of life. “These children have been the biggest teachers that taught us how important and necessary it is for everyone to be aware of themselves and of their health. All the children here are brave cancer fighters. A number of them have left beautiful memories that we cherish, including their paintings.”
“Their parents were brave, patient and believed in the Almighty, accepting graciously the status of their children. Some of these children attained a close link with their colleagues at Dar Al Hanan, the hospitals, and the outside world,” said Dr. Wahid Al Kharusi, President of the Oman Cancer Association (OCA).
Dar Al Hanan is a project developed by OCA to support children with cancer residing outside the capital. Officially inaugurated in January 2011, Dar Al Hanan opened as a landmark project dedicated to serve the needs of children with cancer who require outpatient treatment. Since then, the doors have been open to all children under the age of 17 years, suffering from cancer.
“The number of children who suffer from cancer in the Sultanate is on the rise. Feasibility in such cases is most often difficult, especially for families outside the capital. In such cases, projects such as Dar Al Hanan always tend to be a blessing and give hope to these children and their families, a better and a brighter future,” Othman said.
Dar Al Hanan is operational 24 hours a day for cancer patients and their families, from infancy to the age of 13. It provides free accommodation, three square meals a day and shuttle services to and from where they are receiving treatment: Royal Hospital or Sultan Qaboos University Hospital.